DuoArt is an ensemble formed by two musicians – Sasha Burdin and Leo Iogansen. Their recent program Colors of Spring – a musical contemplation on the topics of Spring and romanticism through the music of J.Brahms, C.Franck, and A. Piazzolla. 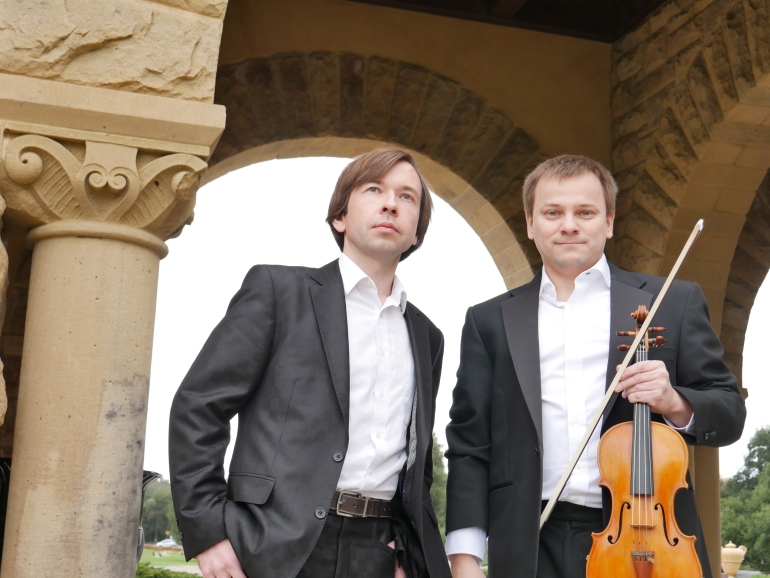 Sasha Burdin is a concert and jazz pianist, composer, bandleader, and music educator. He received DMA from the University of Iowa. In 2014 as a member of Ephawk Quartet he performed Messiaen’s Quatuor pour la fin du temps. The concert tour in western Iowa has gained a considerable resonance, the performance was regarded in media as “miraculous.” The same year Mr. Burdin accepted fellowship at Tanglewood Music Festival in Lenox, MA. In 2015 Sasha and his colleagues Thiago Ancelmo, clarinet, and Andrew Uhe, violin have formed Nashat Trio. They performed works By Bartok, Milhaud, Khachaturian and Schostakovich, and appeared as featured ensemble at Laredo Music Festival 2016. In 2015 -2016 season Sasha Burdin participated in Johnson County Landmark jazz band as a principal pianist, performing with guest artists – Carmen Bradford (former singer at Count Basie’s Jazz Band) and Melvin Butler (Brian Blade Fellowship Band). In 2016 Sasha Burdin has founded The Sasha Burdin Quartet, performing original compositions and pieces from standard jazz repertoire. In 2016 he started a collaboration with Rachel Joselson, soprano, and Scott Conklin, violin on Medtner’s music. The collaboration soon resulted in a series of concerts, and CD Ich denke dein: Songs and Chamber Works of Nikolai Medtner.
CD of Medtner’s solo works. As a part of his doctoral project, Sasha Burdin recorded a number of Medtner’s piano solo works, including rarely performed Second Improvisation, op.47. A new CD with these recordings is getting ready to be released in 2019.

Born in Russia, Leonid started his violin studies at 7. He has premiered many new chamber and solo works, including his own Violin Concerto. He has won several competitions, such as the Young Virtuosos International Competition in 1999, which resulted in his performance in Carnegie Hall the same year. As a composer, Leonid has written many solo, chamber, and orchestral pieces, much of which were performed by notable ensembles, such as JACK Quartet. In the Summer of 2006, Shuang Yin International Music Festival commissioned Leonid for a number of humorous pieces for various chamber ensembles. The performances were broadcast on Taiwan’s National Television. Leonid is also a visual artist and has won many competitions, including Gold Key Award for at the Boston Globe competition in 1997.
Leonid graduated with BM from Boston University, MM Masters degree with the same majors from Peabody Conservatory, and a PhD in composition from the University of Iowa. He studied violin with Dana Mazurkevich and Keng-Yuen Tseng, and composition with David Gompper, Samuel Headrick, Richard Cornell, Martin Amlin, Charles Fussell, and Bruno Amato. Leonid is also a software developer and inventor and has published several innovative apps on the iTunes app store. One of the apps Tollsmart Toll Calculator, has hundreds of thousands of downloads. This led to Leonid’s co-founding the company Tollsmart – as a CTO. His latest project focuses on solving the issues of street parking.
Email ThisBlogThis!Share to TwitterShare to FacebookShare to Pinterest
Home
Subscribe to: Posts (Atom)