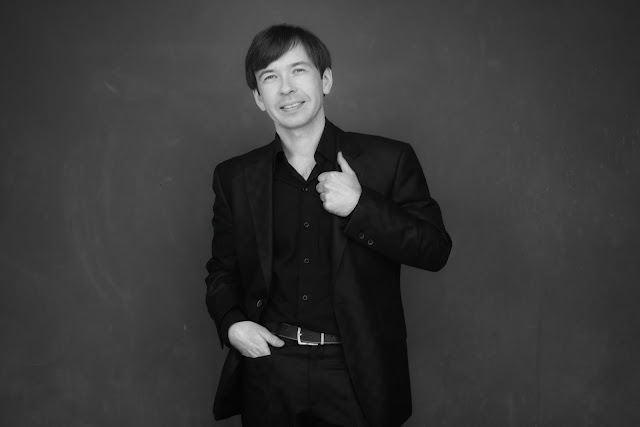 Sasha Burdin is a concert and jazz pianist, composer, bandleader, and music educator. He performed concerts in Russia, Europe, and the US.
Colin Clarke in recent CD review for Fanfare Magazine described the pianist's performance as “positively spellbinding,” adding that “the sheer sweep of the piano contribution … is remarkable.”
The CD "Ich denke dein," released on Albany Records in 2019, includes rare vocal and chamber works by Nikolai Medtner and was recorded with Rachel Joselson, soprano and Scott Conklin, violin.

After the piano duo performance of Ditriech’s Sonata and Schumann’s “Pictures from the East” Boston Musical Intelligencer described Burdin’s performance as “Intelligently understated and accomplished musicianship.”

In 2014 with other members of Ephawk Quartet he performed Olivier Messiaen's Quartet for the end of Time. The concert tour in western Iowa has gained a considerable resonance, and the performance at Council Bluffs Performance Center was regarded as “miraculous” in local media outlets.

In the summer of 2016, Sasha Burdin has formed The Sasha Burdin Quartet - a jazz group, focusing on his original compositions and pieces from standard jazz repertoire, written by Miles Davis, Sonny Rollins, Herbie Hancock, John Coltrane and others.

During the 2012-2013 season, Sasha Burdin served as the principal pianist for the touring ensemble of the Center for New Music at the University of Iowa. Performances included contemporary pieces such as Gerard Grisey's Talea, Laura Schwendinger's C’e la luna questa sera?, and John Aylward's Functions of Consciousness.

Sasha Burdin is a passionate piano teacher and music educator. He was a teaching assistant in the piano area and jazz studies at the University of Iowa. He also served as a piano faculty at Iowa Wesleyan College and at Indian Hills Community College in Iowa. He currently holds a Master Teacher position at Pacific Piano School in San Jose, California.

In the Spring of 2018 Sasha Burdin has completed his doctorate at the University of Iowa. His final thesis is dedicated to the analysis and performance of tempo and rhythmical principles Al Rigore and Flessibile in Medtner's compositions. As a part of his final doctoral project, Dr. Burdin has recorded Medtner's solo works: Tales op. 20, op. 34 No. 2,3, Three pieces op.31 including Improvisation op. 31 No. 1, and the Second Improvisation, op. 47.

He received MM from Bowling Green State University and Maymonid Moscow State Classical Academy, and DMA from the University of Iowa, where he studied with Uriel Tsachor.